Deprecated: Function create_function() is deprecated in /home/customer/www/peopleforstudentrights.com/public_html/media/widgetkit/widgets/lightbox/lightbox.php on line 49
 Count 10

CUSD's 2013-14 Employment Contracts and 2013-14 Budget were entered into illegally; in violation of state and federal laws, board policies and employment contract provisions regarding good faith negotiations.

Contracts entered into illegally are not enforceable.

The illegal contracts resulted in the unjust enrichment of CUSD employees at the expense of the quality of education that students received; which, resulted in a measurable decline in the academic performance of students across all demographics.

The illegal contracts resulted in the unjust enrichment of CUSD employees at the expense of taxpayers who; under the California Constitution, are promised that their tax money will FIRST be used to fund a public education system that provides every student with an equal opportunity to achieve a quality education. Equality of educational opportunity as defined by 44 years of California case law requires all school districts to posses an equal ability in terms of revenue to provide students with substantially equal opportunities for learning.

The same opportunity to obtain:

A COLA only budget did not contain sufficient revenue to trigger salary restoration language resulting from the 2010 teachers union strike.

As a result of the Governor's May budget revision, CUSD was projected to receive and additional $8.42 million in "new" LCFF revenue. Because this was a "projection", the State Board of Education instructed districts not to include new LCFF money in the adoption of their 2013-14 budget.

CUSD in collaboration with it's employee bargaining units CUEA, CSEA, Teamsters, and unrepresented CUMA did so anyway, and claimed that the $8.62 million in new LCFF revenue + the COLA triggered salary restorations in the amount of $5.62 million.

CUSD adopted it's 2013-14 Budget without having employment contracts in place as required by law, and failed to file an impasse as required by law.  At that time employee compensation represented over 92% of the District's entire budget.

CUSD in collaboration with it's employee bargaining units CUEA, CSEA, Teamsters, and unrepresented CUMA failed to negotiate in good faith by knowingly and intentionally delaying the execution of 2013-14 employee contracts so that new LCFF revenues could be included in the adoption of the 2013-14 budget.

CUSD in collaboration with it's employee bargaining units CUEA, CSEA, Teamsters, and unrepresented CUMA, failed to comply with public disclosure laws with the intent of negotiating behind closed doors to reach a deal that it knew, or should have known would unjustly enrich employees at the expense of students and taxpayers.

As a result of the intentional mis-conduct of CUSD in collaboration with it's bargaining units CUEA, CSEA, Teamsters, and unrepresented CUMA, received $5.62 million dollars in salary restorations that were not legally triggered:

CSEA: (No entitlement to restoration)

CUSD in collaboration with it's employee bargaining units CUEA, CSEA, Teamsters, and unrepresented CUMA, then used class size increases, furlough days, deferred maintenance and cuts to programs to find $13,375,400 in necessary cuts to balance it's 2013-14 budget after restoring $5.62 million in salaries.

Students and taxpayers have suffered irreparable harm as a result of this intentional mis-conduct. Financial damages of $5.62 million per year since July 1, 2013 (3 years) is $16.86 million dollars that CUSD could have chosen to use to reduce class sizes, restore programs, increase instructional time and maintain facilities. Taxpayers will forever be forced to bear the cost of associated illegal pension increases resulting from increased salary schedules and increased health and welfare benefit packages.

As a result of these illegal contracts, students have been forced to endure overcrowded classrooms, overworked teachers, sub-standard facilities and less instructional time then their peers in other districts, resulting in a notable decline in the academic performance of students across all demographics as evidenced by LCAP data and historic test results.

The intentional mis-conduct of CUSD and it's bargaining units CUEA, CSEA, Teamsters, and unrepresented CUMA prevented students from achieving their individual academic potential, and denied every student in the Capistrano Unified School District their fundamental right to equality of educational opportunity.

This was documented in a Memorandum from Clark Hampton, Deputy Superintendent, Business and Support Services re: USE OF ADDITIONAL FUNDING FROM 2012- 2013 to 2013- 2014 AND PUBLIC DISCLOSURE OF COLLECTIVE BARGAINING AGREEMENT page 1 and Chart on Page 2 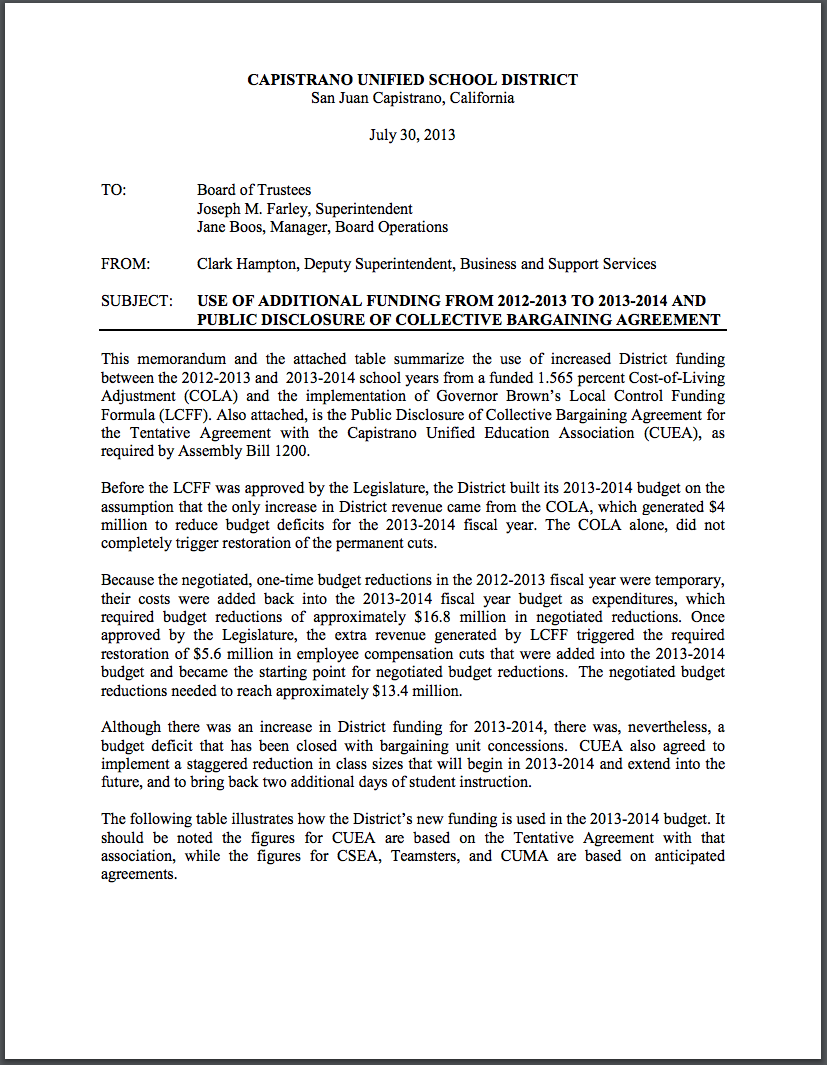 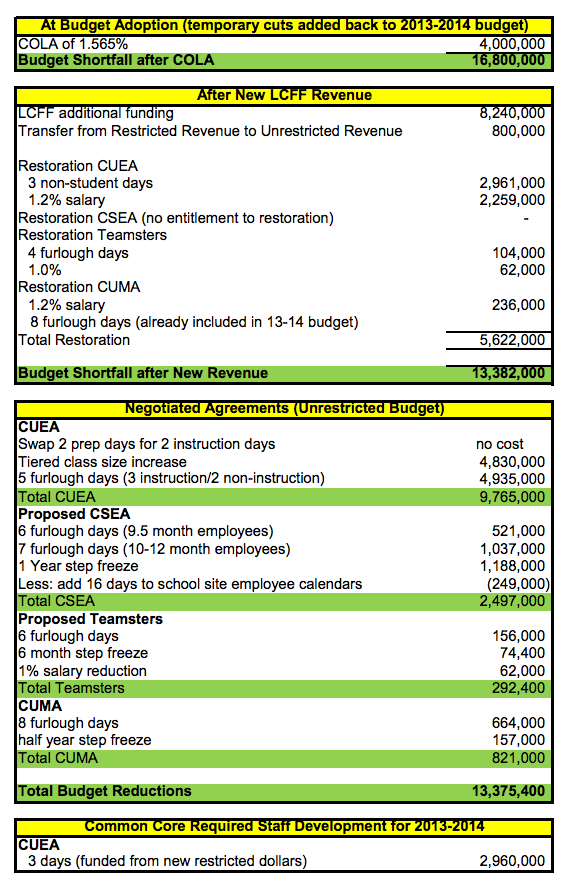 "ARTICLE 12 - Negotiation Procedures 12.1 The District and the Association agree that they will meet and negotiate pursuant to the requirements of State law sufficiently in advance of the end of the term of this agreement so that there is sufficient time for a new agreement to be reached or for the resolution of an impasse. No later than April 1 of the calendar year in which this agreement expires the parties shall submit their initial proposals to each other for a successor agreement or re-openers. The District shall give proper notice of such proposals at the first school board meeting following the submission of the proposals.

12.1.1 The parties shall commence to meet and negotiate on re-openers or a successor agreement beginning no later than ten working days after the completion of the public notice requirements listed above.

12.2 At the first negotiation meeting between the Association and the District, the parties shall negotiate on procedures they use for that year's negotiation sessions, exclusive of that amount of release time which is already determined and stated in 12.3.

* It should be noted that this contract can no longer be found anywhere: Contracts for the period 2010-2013 have been erased from CUEA website and CUSD website. We know from Board audio that 2012-13 was a one year contract: Board Audio at 0:30:26 http://cusd.capousd.org/cusdweb/boardaudio/5-8-13/05-08-13RegBdMtg.mp3. CUSD only has the current contract available to the public. 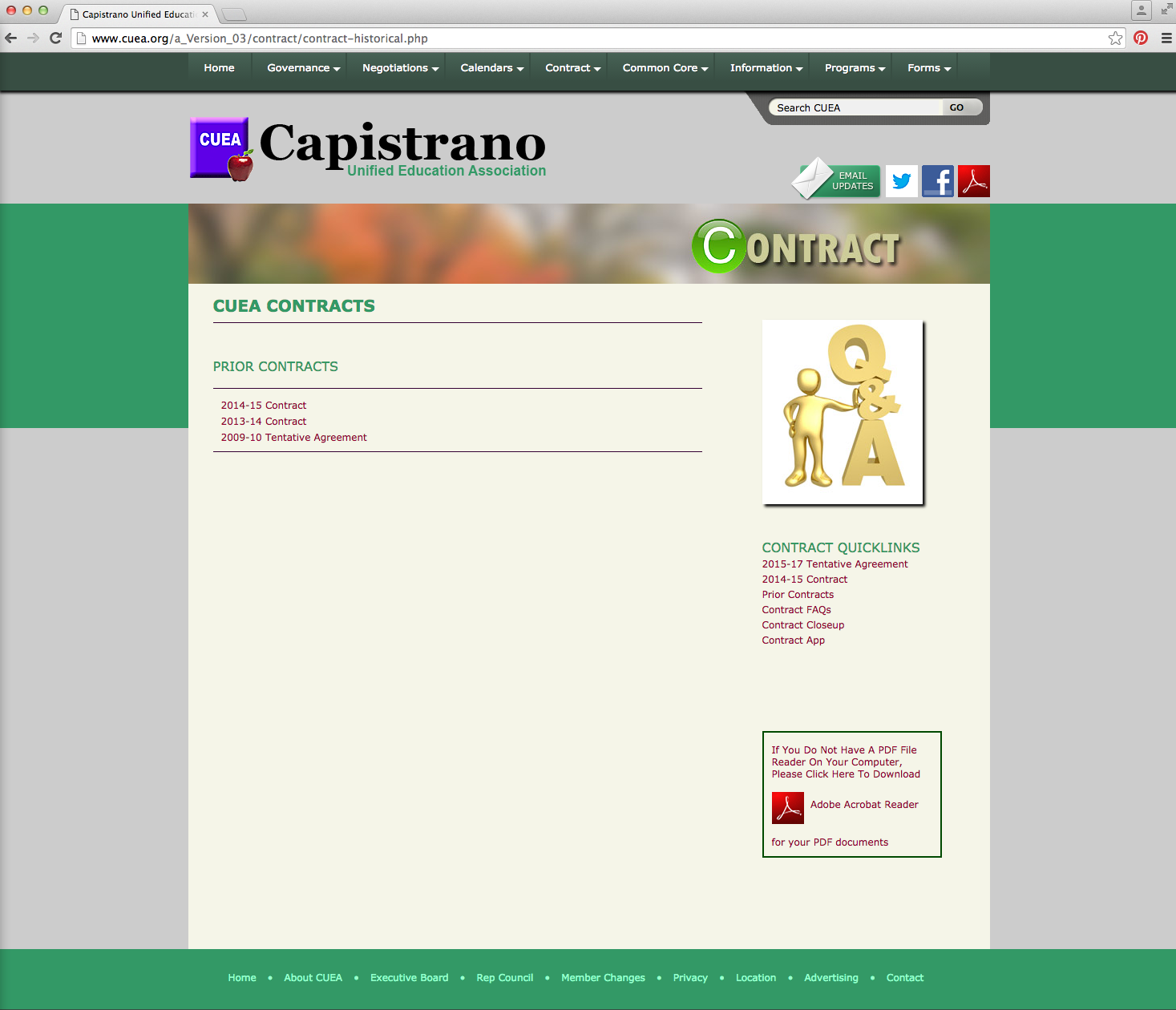 (b) Meeting and negotiating shall not take place on any proposal until a reasonable time has elapsed after the submission of the proposal to enable the public to become informed and the public has the opportunity to express itself regarding the proposal at a meeting of the public school employer.

(c) After the public has had the opportunity to express itself, the public school employer shall, at a meeting which is open to the public, adopt its initial proposal.

(e) The board may adopt regulations for the purpose of implementing this section, which are consistent with the intent of the section; namely that the public be informed of the issues that are being negotiated upon and have full opportunity to express their views on the issues to the public school employer, and to know of the positions of their elected representatives

(c) If a school district does not adopt all of the revisions to its budget needed in the current fiscal year to meet the costs of a collective bargaining agreement, the county superintendent of schools shall issue a qualified or negative certification for the district on the next interim report pursuant to Section 42131 of the Education Code.

C.      CUSD failed to comply with Board Policy 4143.1 Public Notice - Issues of Meeting and Negotiations 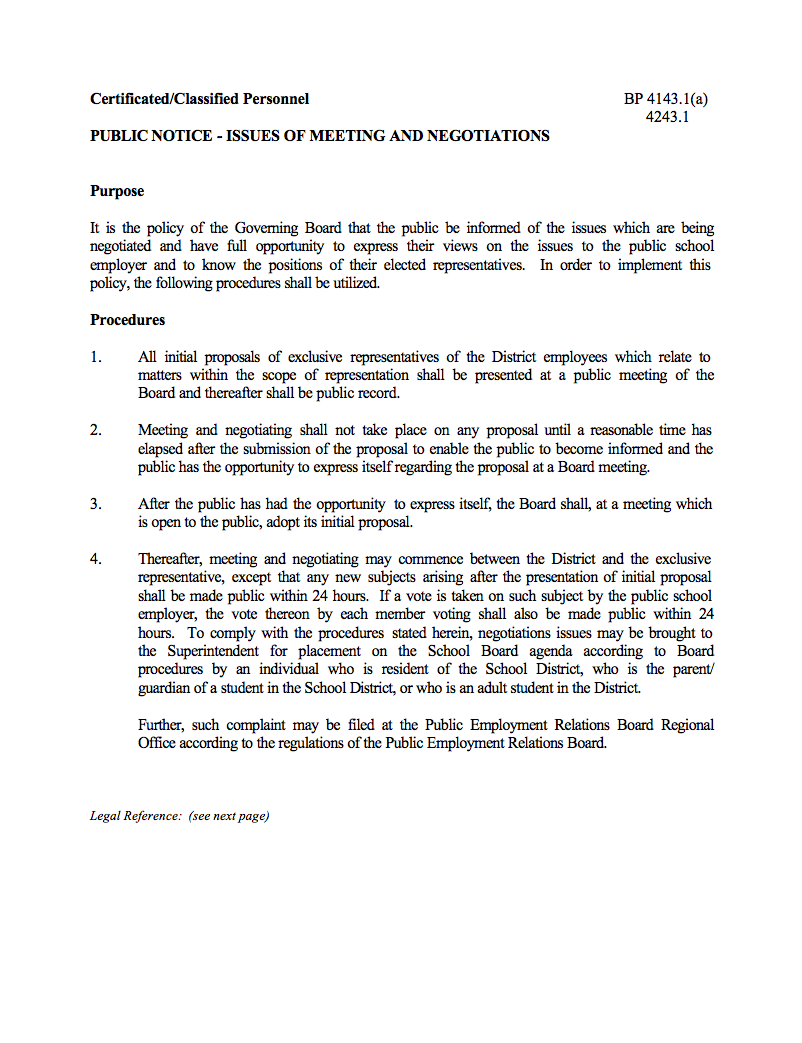 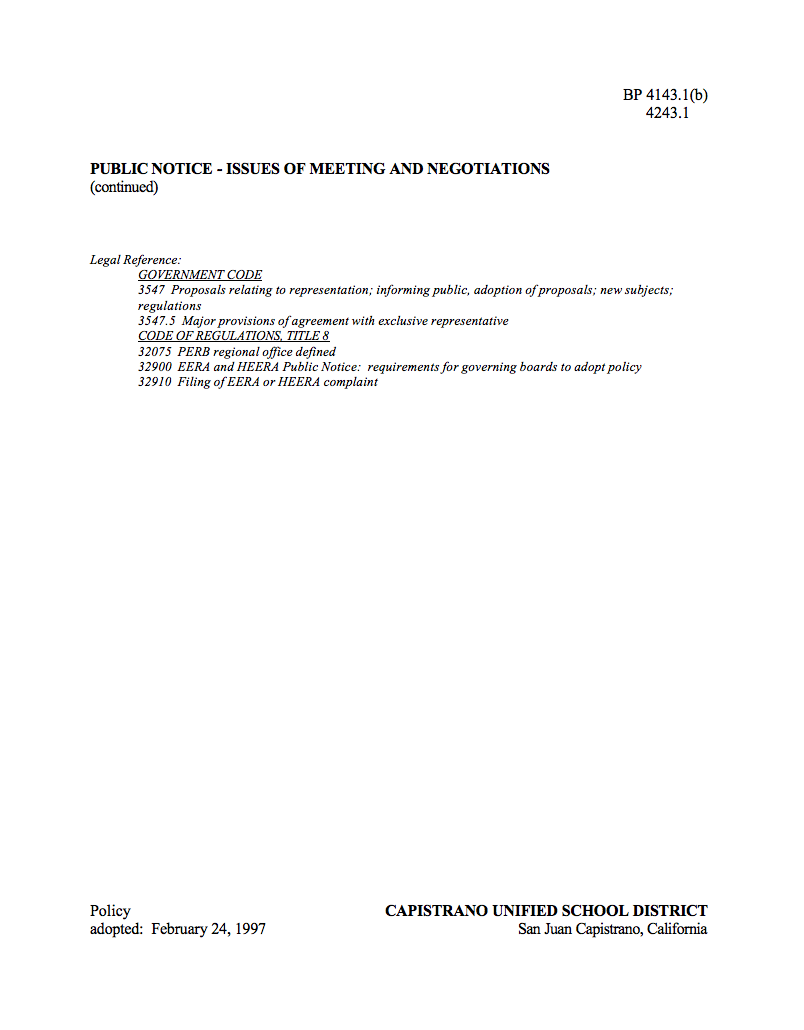 TIME LINE OF 2013-14 CONTRACT NEGOTIATIONS BETWEEN CUSD and CUEA 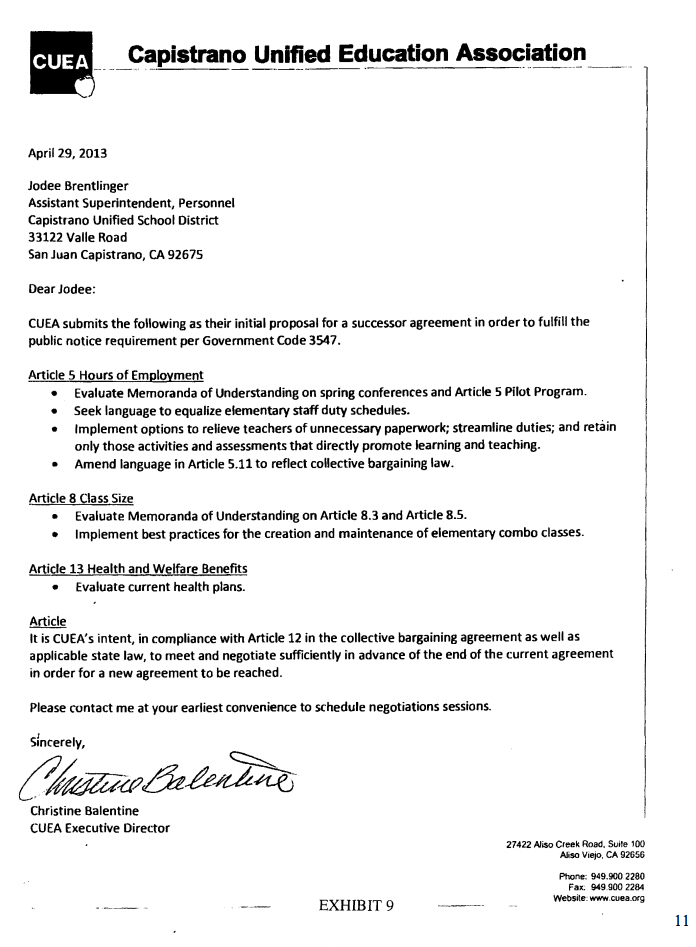 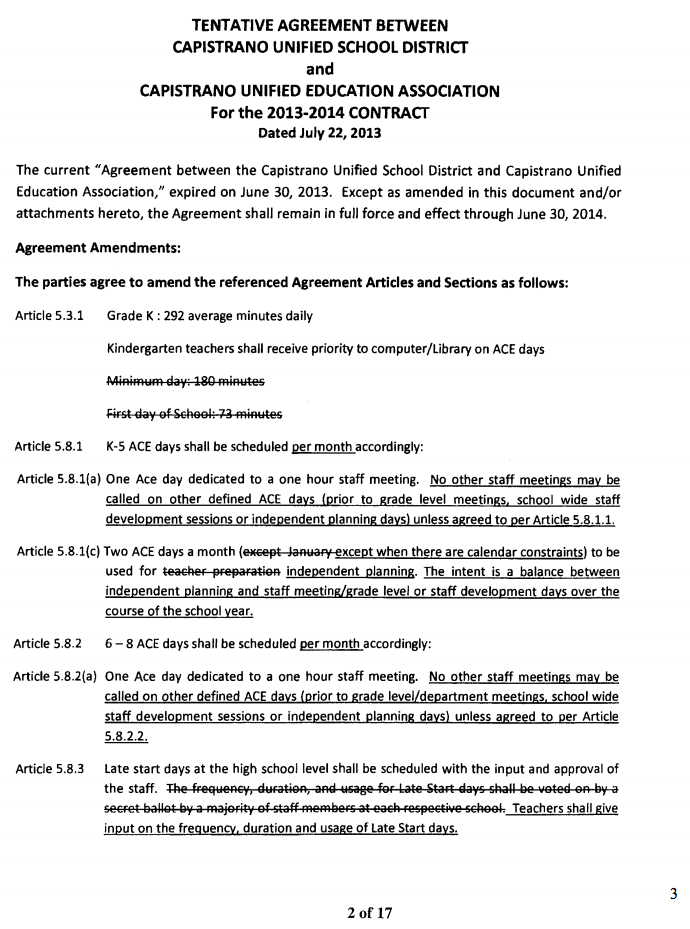 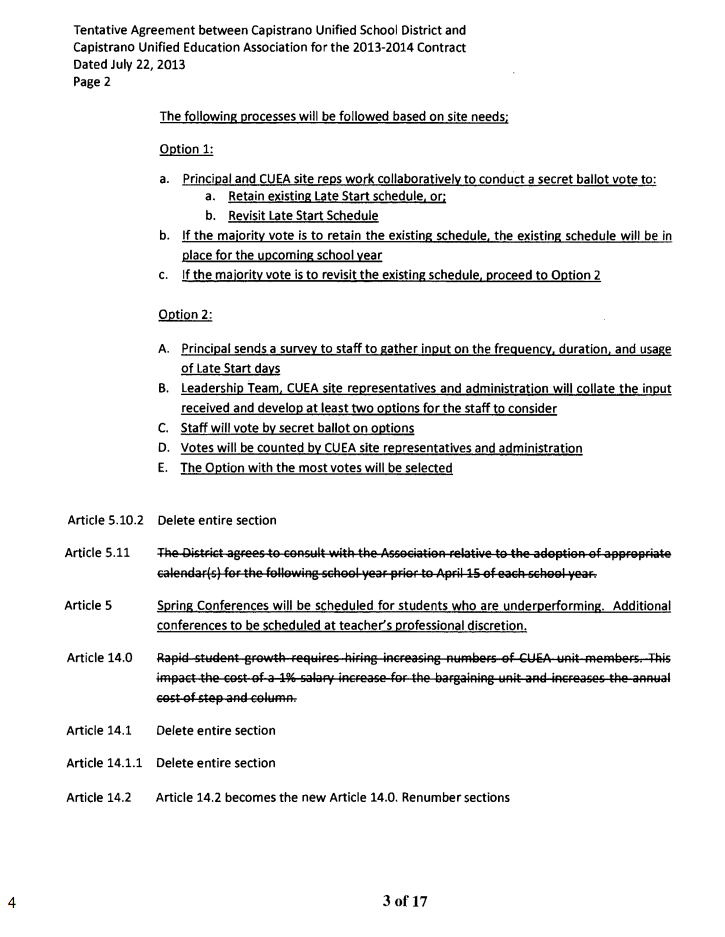 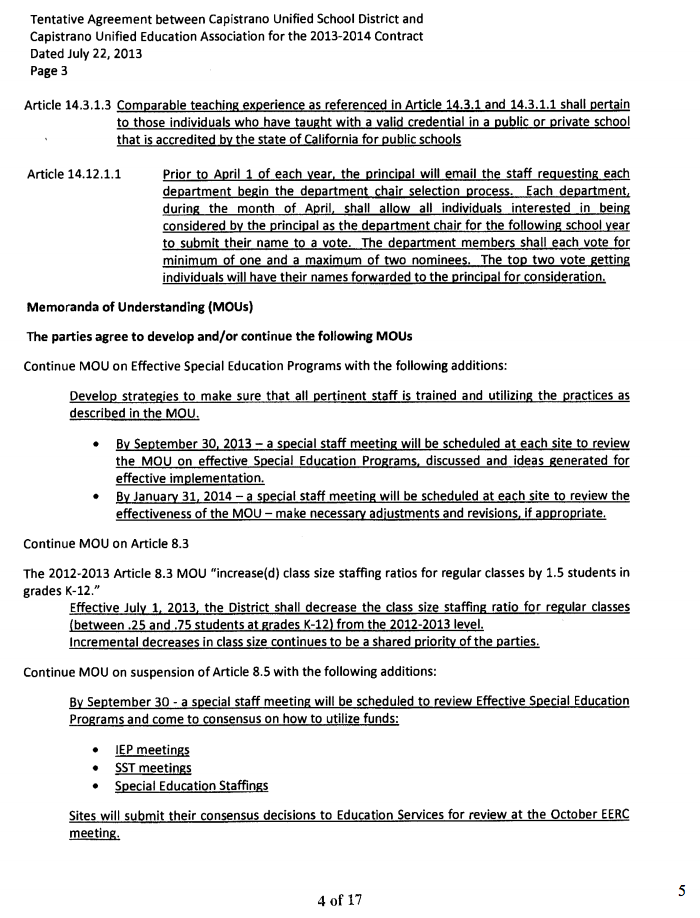 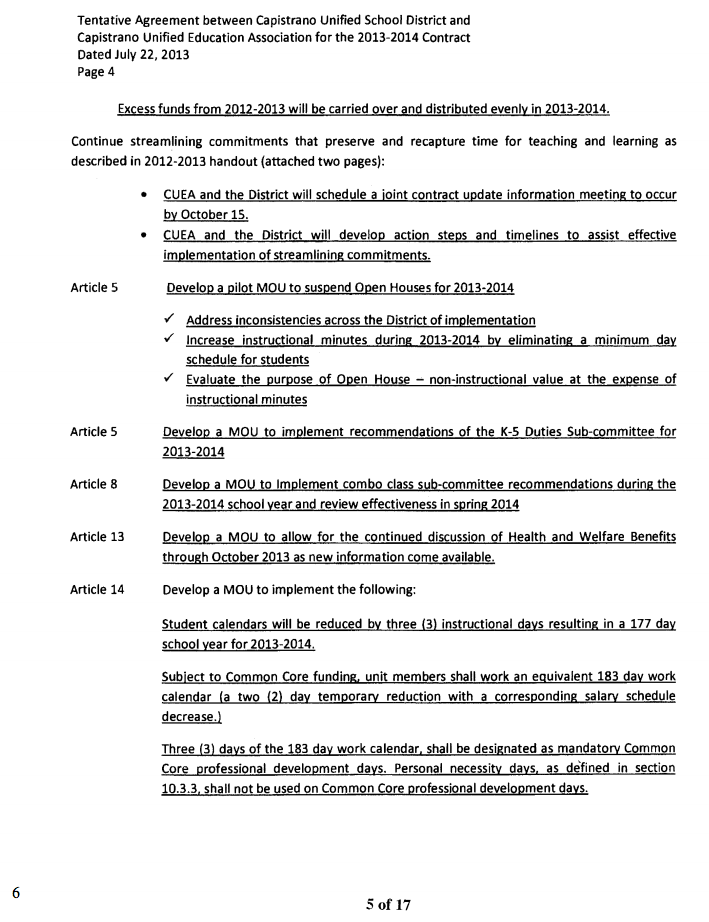 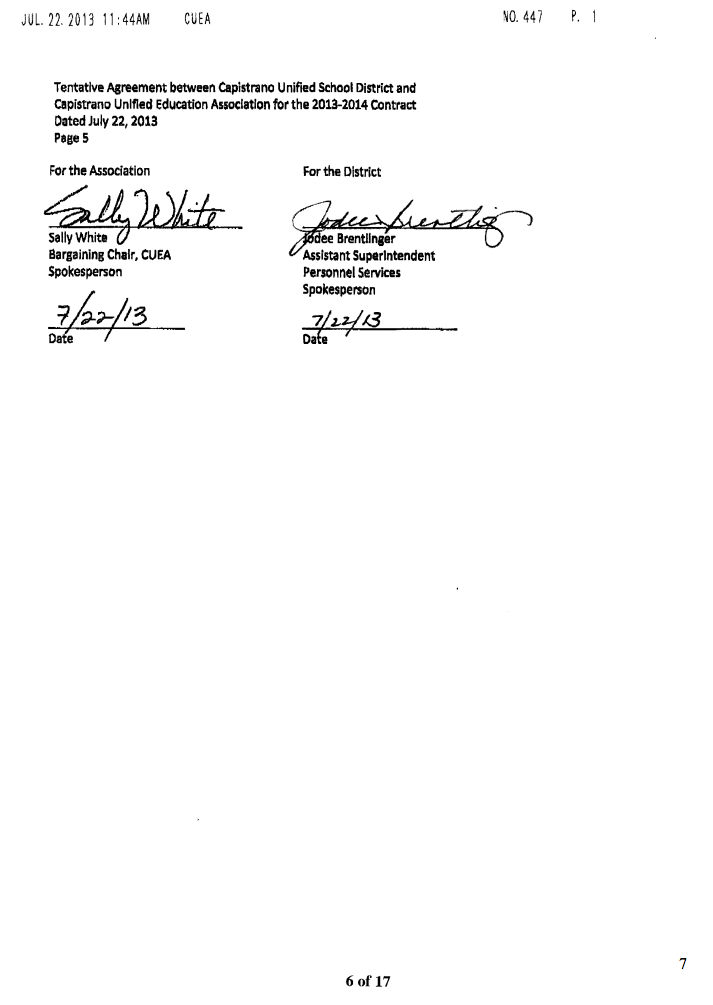 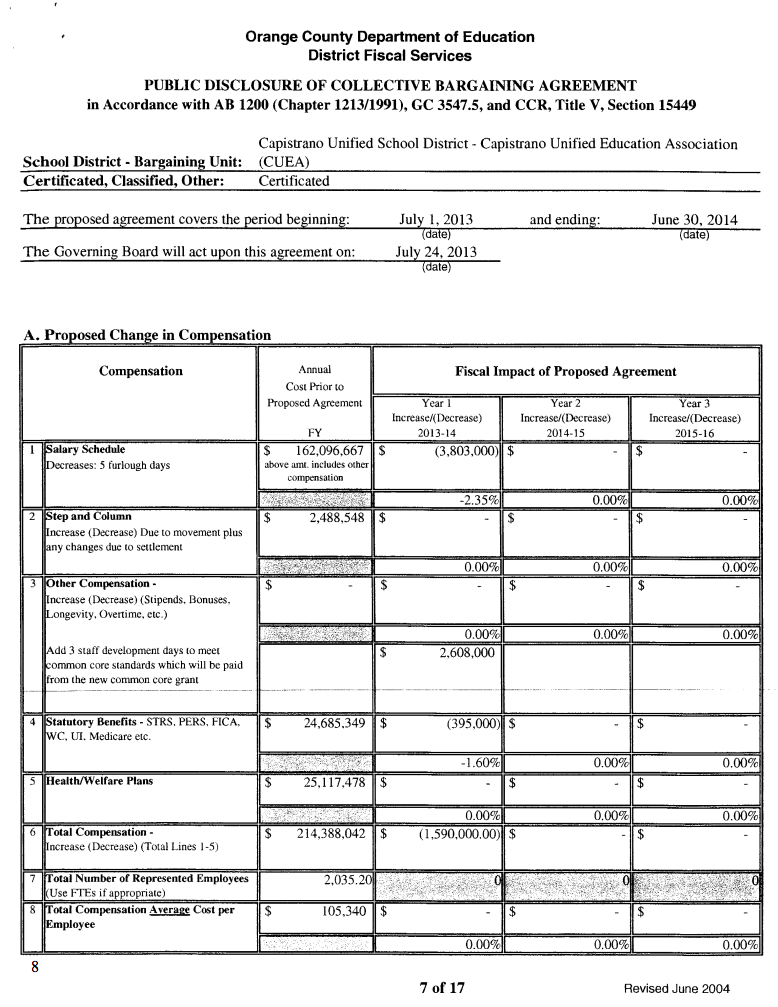 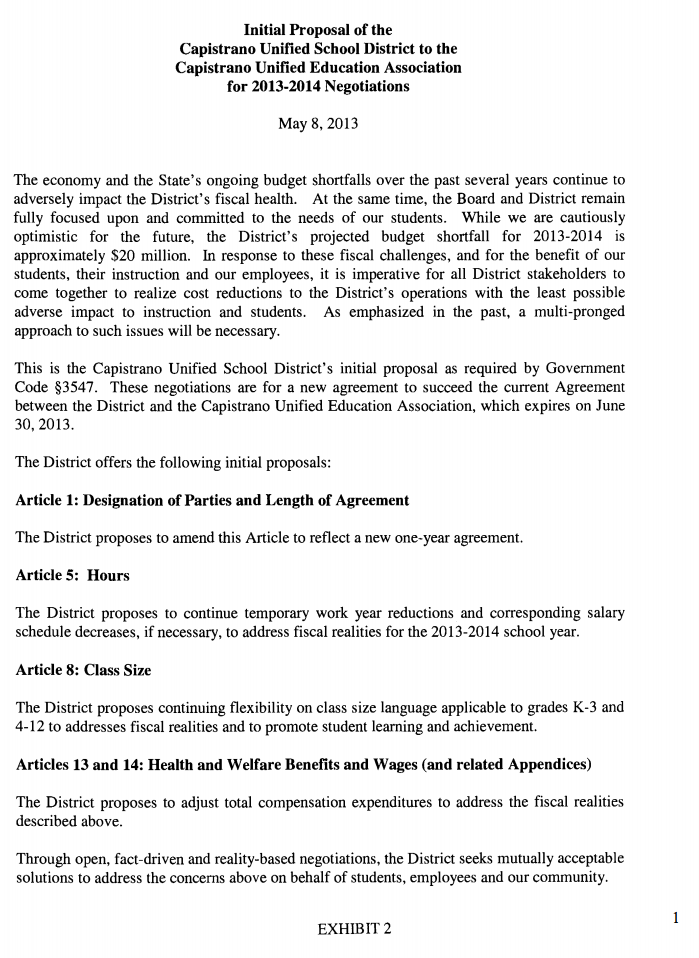 TIME LINE OF 2013-14 CONTRACT NEGOTIATIONS BETWEEN CUSD and CSEA 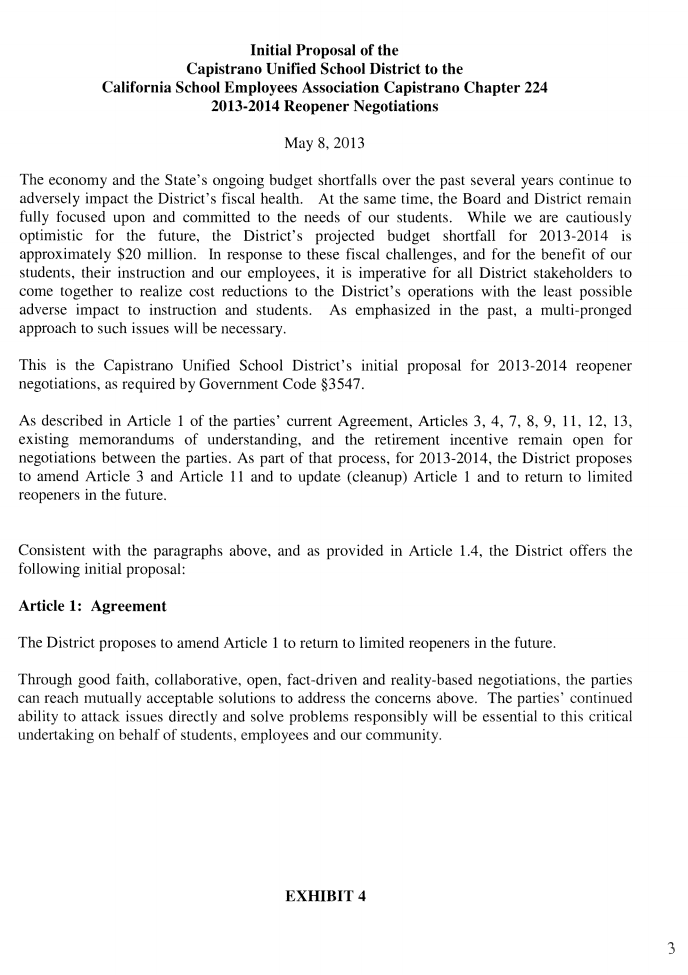 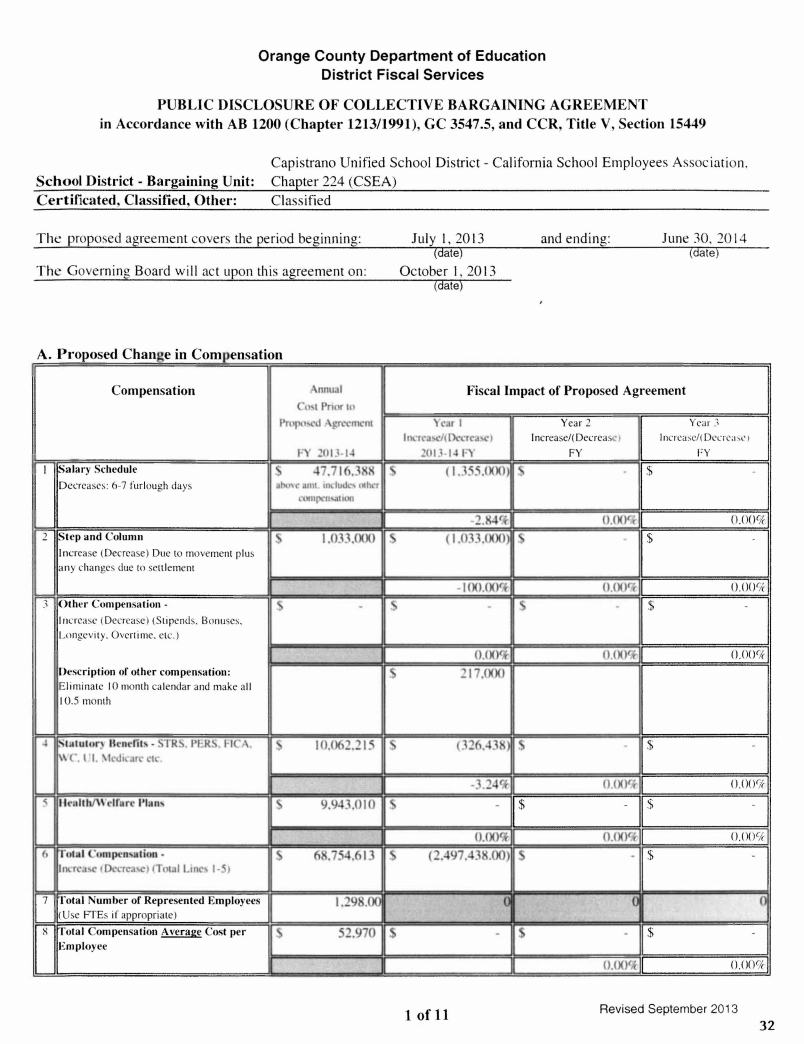 TIME LINE OF 2013-14 CONTRACT NEGOTIATIONS BETWEEN CUSD and TEAMSTERS 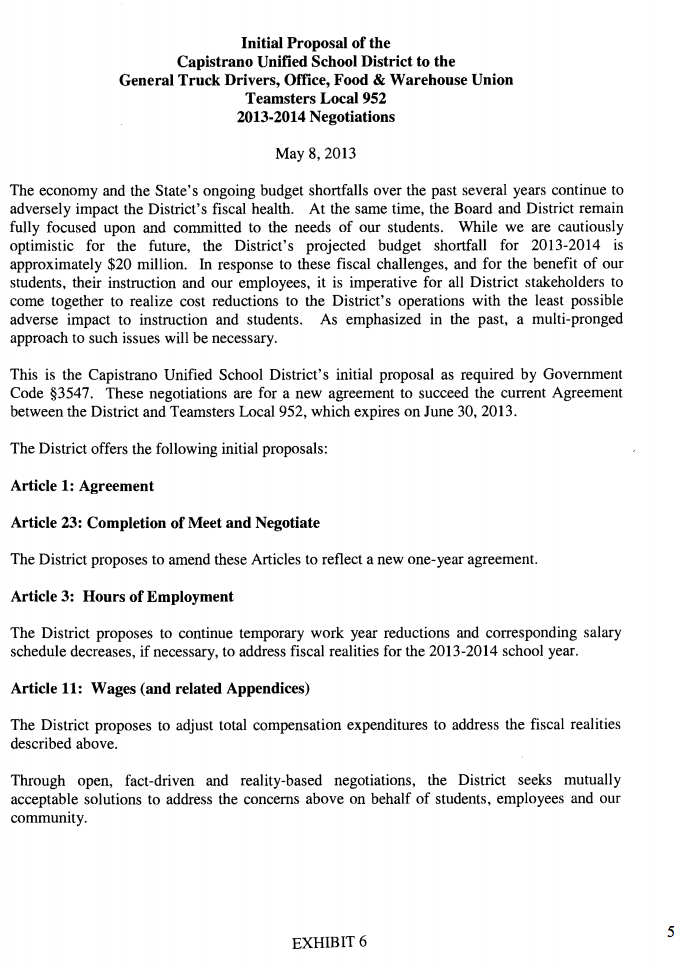 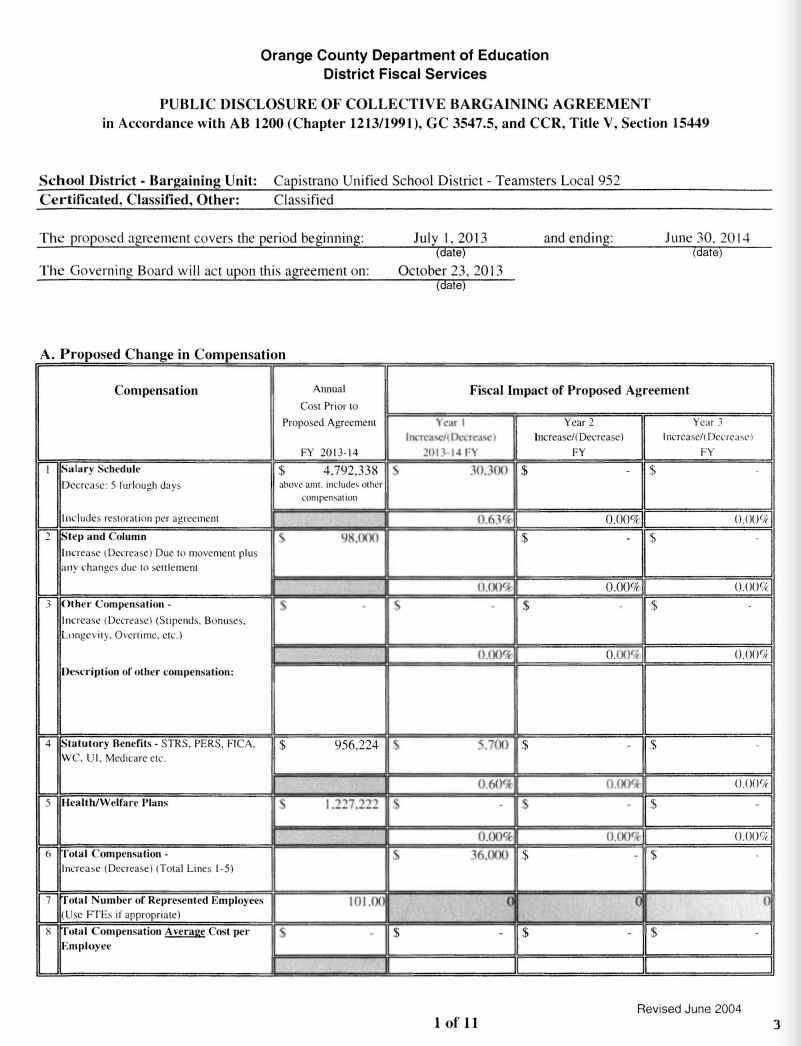 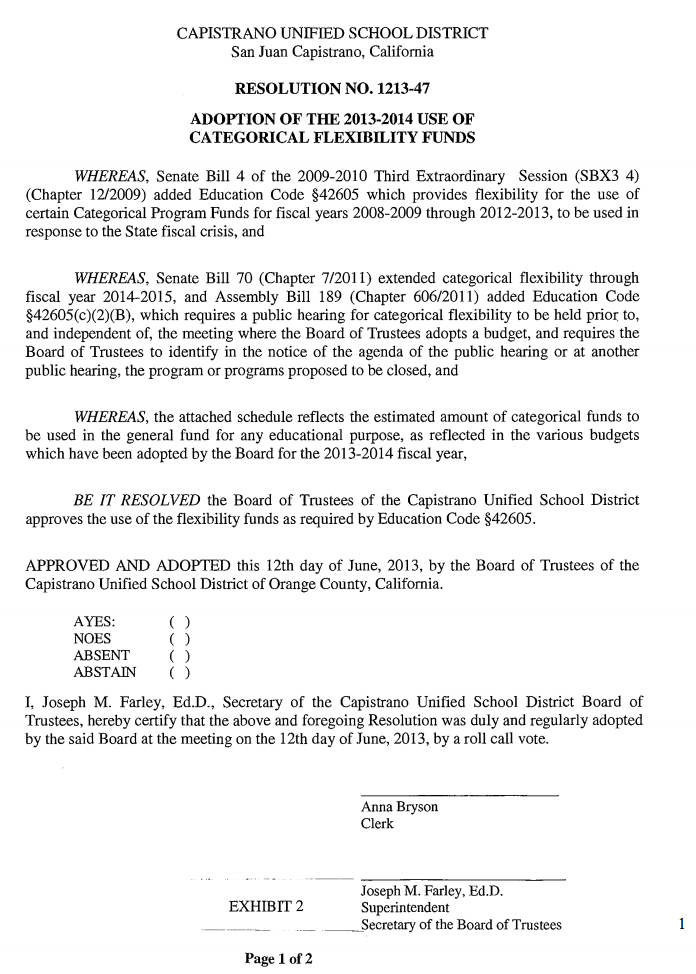 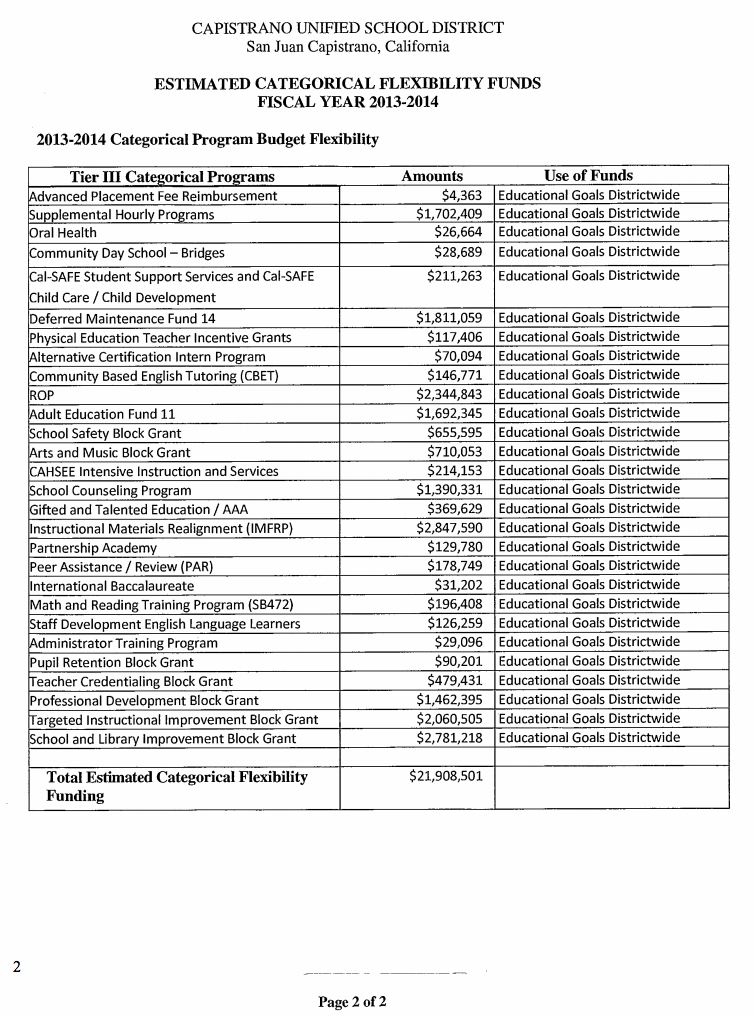 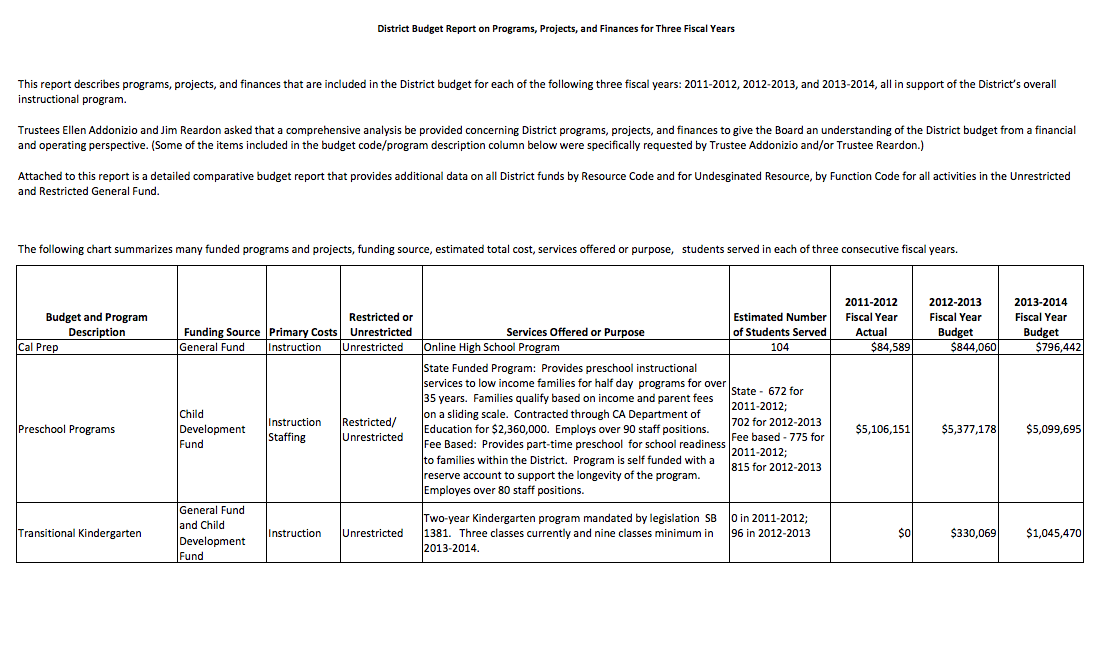 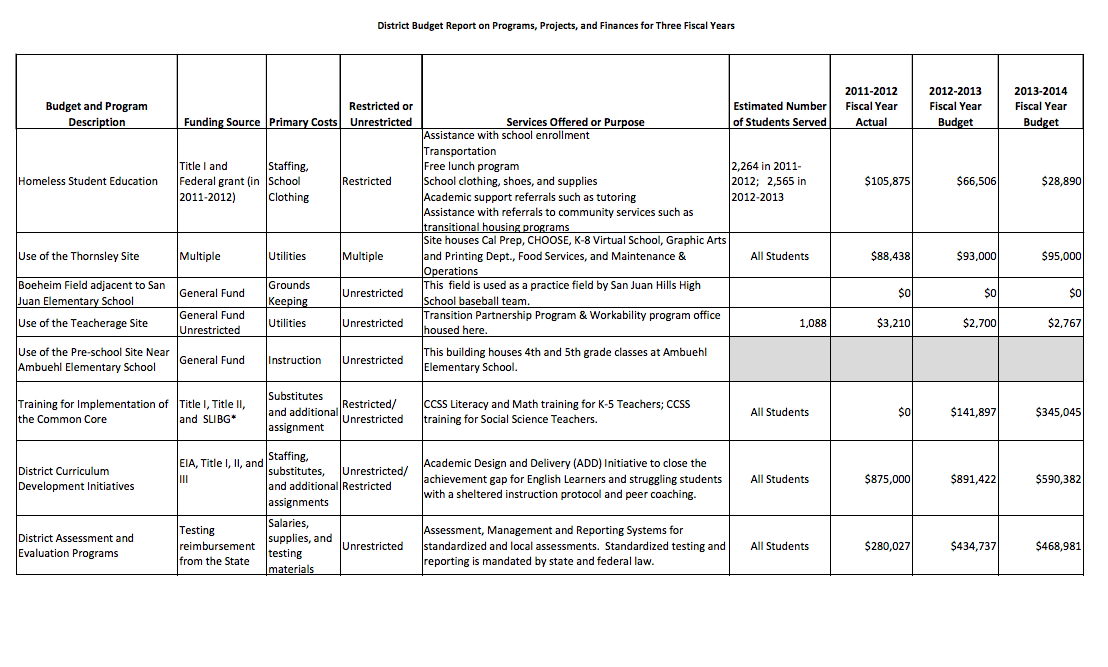 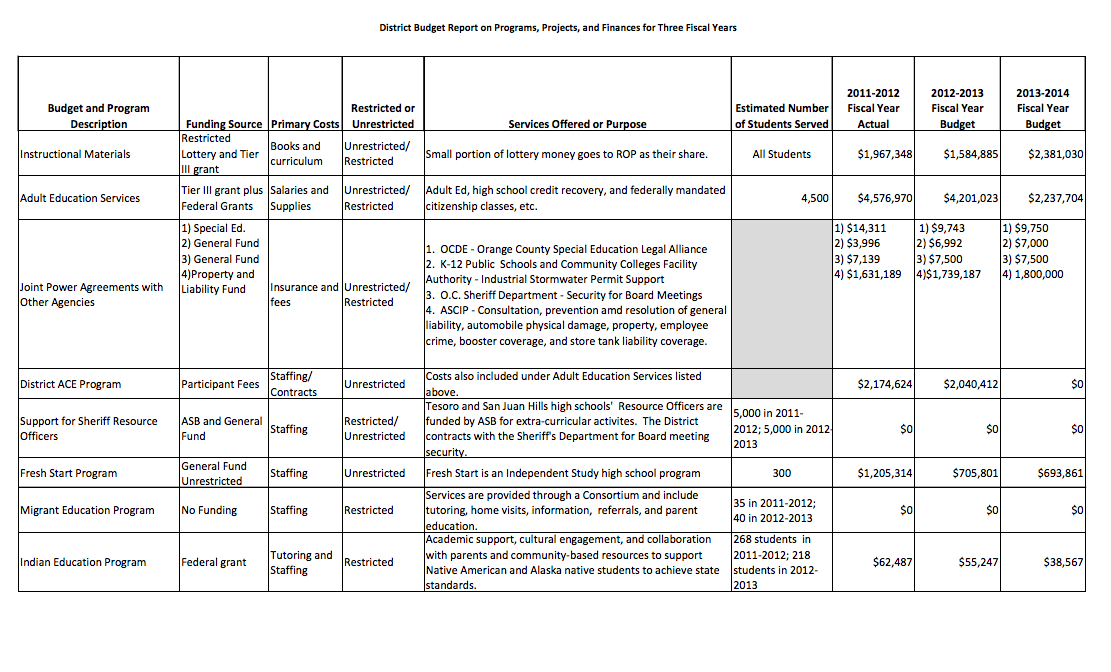 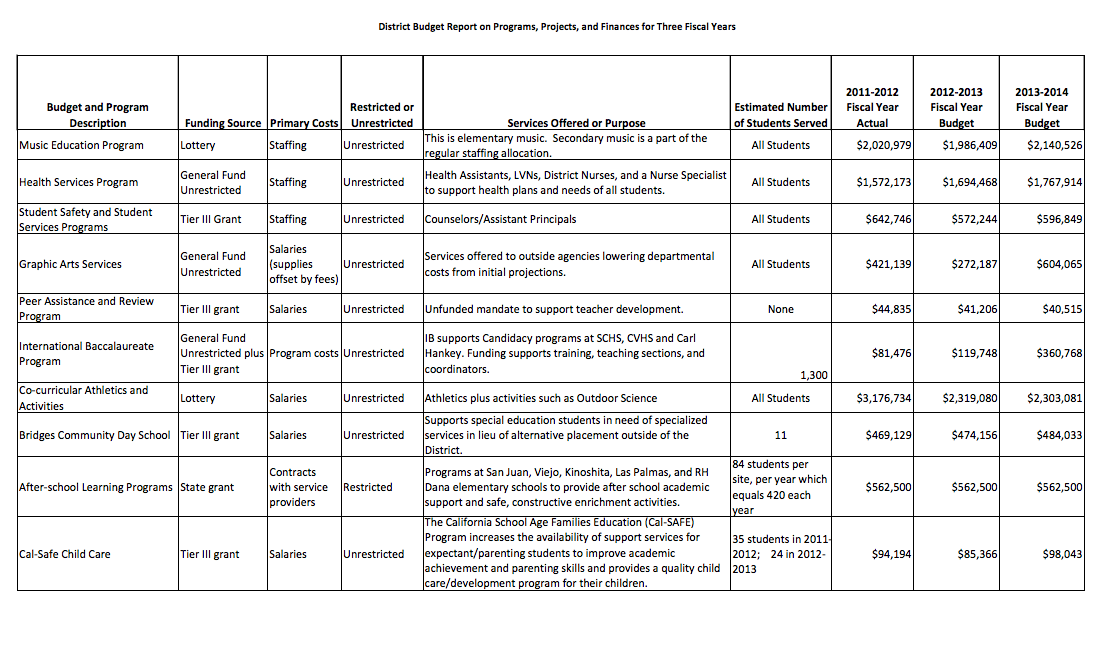 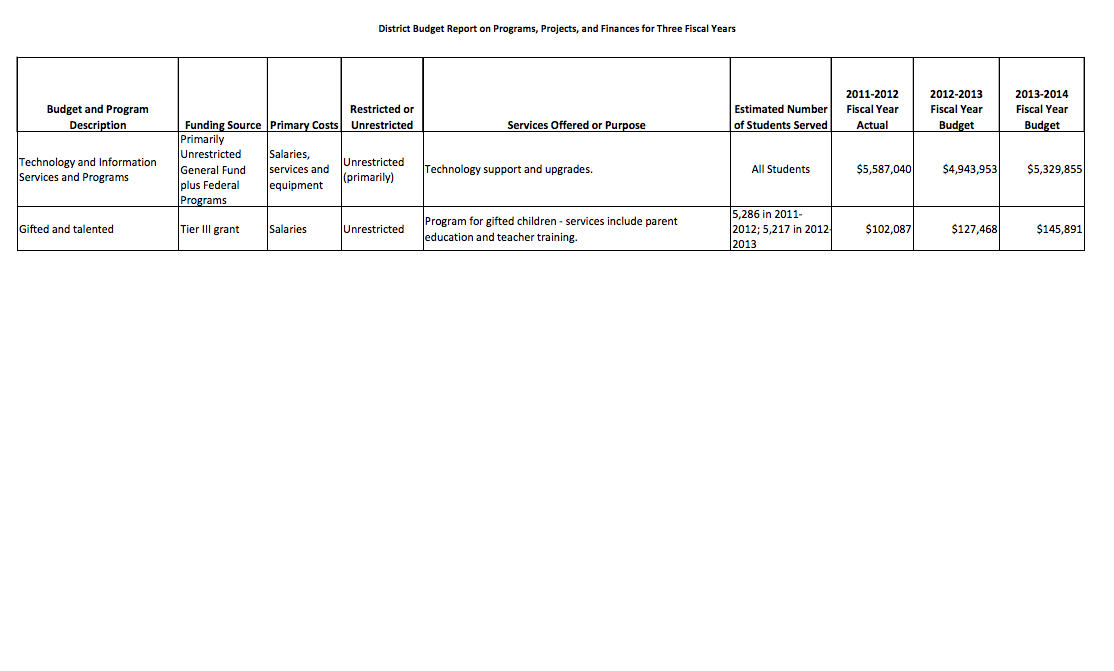 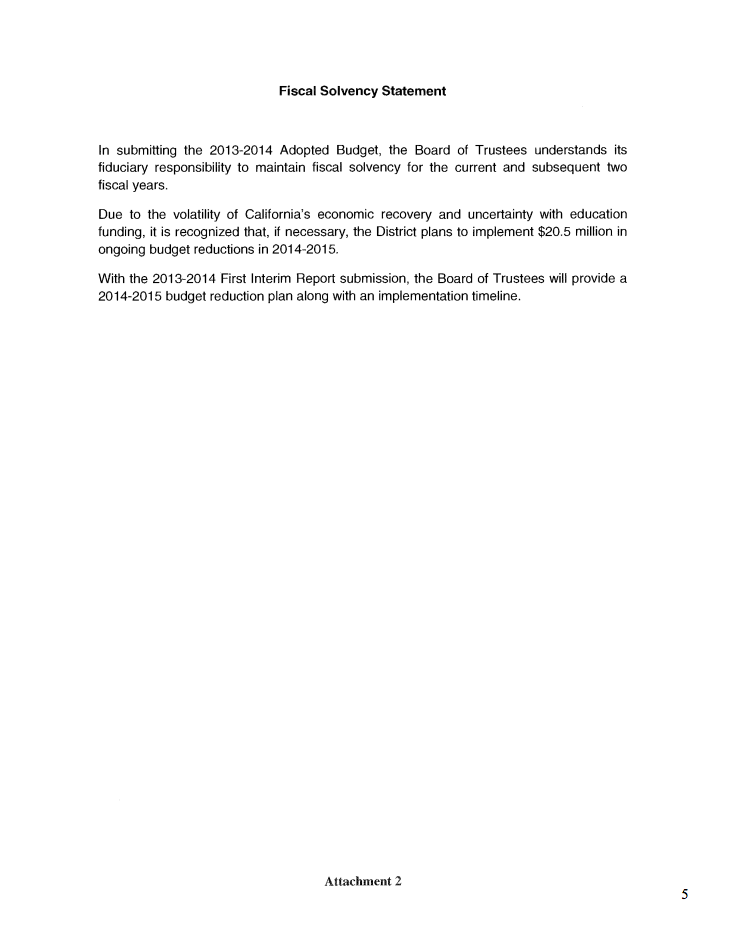 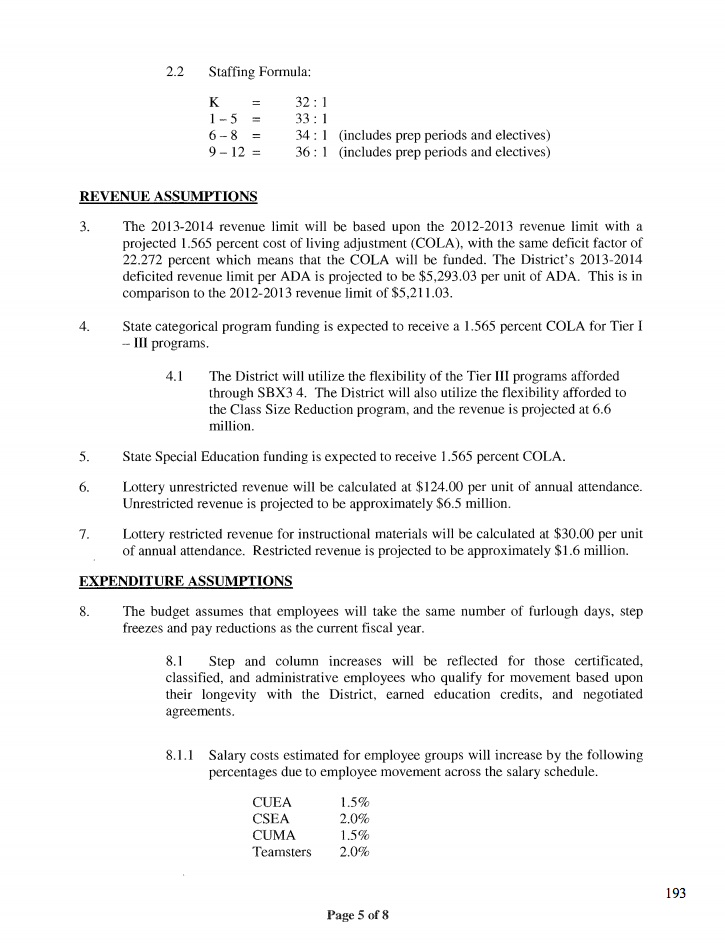 Execution of the FY 2013-14 employment contracts were intentionally delayed. Contracts were not executed on time and an Impasse was not filed. CUSD did this intentionally so that "New" LCFF moneys + COLA could be combined to trigger $5.622 million in salary restorations from the 2010 teachers strike. As a result of collusion of CUSD, CUEA, CSEA, Teamsters and CUMA employees were unjustly enriched at the expense of students and taxpayers who suffered irreparable harm. Contracts entered into illegally are not enforceable. The terms of these contracts were still being modified to benefit employees well into December 2016 5 months after the execution of a budget that used furlough days, class size increases, deferred maintenance and cuts to programs and servicesto balance the Districts budget.

Contained in the Budget is a Fiscal Solvency Statement (page 5)

2.    June 30, 2013 was the deadline for employment contracts to be implemented or an Impasse was to be filed. No impasse was filed.

4.     CUSD received $8.42 million in new LCFF funding. The State Board of Education instructed districts not to include new

Execution of the FY 2013-14 employment contracts were intentionally delayed, and an Impasses was not filed so that the "New" LCFF moneys + COLA could be combined to trigger $5.622 million in salary restorations from the 2010 teachers strike.

By delaying contract negotiations CUSD claimed that the salary restoration trigger had been met. CUSD paid employees $5.622 million in salary restorations, and then started the process of identifying $13,381 in budget cuts for FY 2013-14.

This was documented in a Memorandum from Clark Hampton, Deputy Superintendent, Business and Support Services re: USE OF ADDITIONAL FUNDING FROM 2012- 2013 to 2013- 2014 AND PUBLIC DISCLOSURE OF COLLECTIVE BARGAINING AGREEMENT page 1 and Chart on Page 2

was removed from the agenda

If The District understands that LCFF revenues of $8.42 million were not suppose to be included in the FY 2013- 14 budget then why were salary restorations of $5.62 million that supposedly triggered by a COLA + New LCFF money should not have been allowed to remain in place. Had employment contracts been negotiated in good faith by June 30, 2013 as required, salary restorations would not have been legally triggered and the full $8.42 million could have been used to reduce 2013-14 budget cuts from $16.8 million down to $8 million and students would not have 3 instructional furlough days in FY 2013-14.

The Local Control Funding Formula (LCFF) is not only significantly different; it also is not completely defined for the 2013-2014 school year. As a result. the State has informed Districts actual funding formulas will not be available until the 2014-2015 school year. In addition, full funding under the newly adopted LCFF is expected to be phased in over the next eight years. Funding is frozen at 2007-08 levels by the year 2021.

The document states Exhibit 1 page 1 that the documents have been available for public view which fulfills the requirement of "reasonable time" as outlined in Government Code Section 3547(d). This does not comply with Public disclosure laws.

1% salary reduction to be restored retroactively to July 1, 2013

Salary Freeze will be removed and wages will be restored from July 1, 2013

5 furlough days will be removed and restored as paid days from July 1, 2013

Members will not get an additional floating holiday for 2013-14.